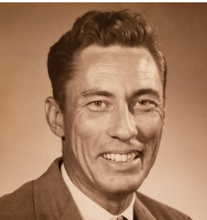 John Holt Andrews of Lacombe LA passed away peacefully at Richard Murphy Hospice House in Hammond on February 8, 2020 surrounded by family. John was born August 28, 1933 in Lake Charles, LA to Elmore and Ruth (Hearne) Andrews. He developed a love and fascination of aviation at a very young age and flew for the first time at the age of 16. He later became a commercial airline pilot with Central Air and retired from TACA Airlines after 25 years of service.  He spent time after retirement with his then wife, Bernice, in Central America on their sailboat “Merry Chase” before returning to the states to complete his Bachelor’s Degree in Aviation at Metro College in Denver.  He settled his family in Lacombe in the 70’s and became a fixture there after retirement.  He was often found at the Post Office, Public Library, Carollo’s/Lishman’s or Mikes Service station with his faithful canine friend Crystal never far away.  He spent many hours painstakingly constructing detailed models of aircraft he had flown as well as some that he dreamed of flying. His models were often created from a block of wood, a sharp knife and his memory.  Others were model kits that he altered to reflect the planes as he remembered or visualized them.  A picture of him with his model auto-gyro was published in Model Aviation Magazine. Many knew him by sight if not by name. He never met a stranger and would converse with anyone willing to spare a moment just to chat. He was preceded in death by his parents, his half-brother Hynson Andrews and half-sister Laura Loftin. He is survived by his brother James Andrews. He is also survived by his children Jerry Andrews (Jenell), Kim Cook (Jim) and Laura Andrews-Clark (Chris), six grandchildren, Clinton Johnson, Jeremy Andrews, Matthew Clark (Stacey), Ashley Clark, Jana Gray (Matthew) and Kylie Larousse (Jeremy) and four great grandchildren, Fallon, McKenzie, Makenna and Jaxton. He is also survived by his ex-wife, Bernice Sisk who remained a good friend.  Special thanks to his longtime friend, Clay Nichol, for the many hours he spent keeping him company and driving him on errands, appointments and to fly-ins. Memorial services will be held at a future date and will be announced when finalized. In lieu of flowers please consider a donation to Richard Murphy Hospice House of Hammond.

To send flowers to the family or plant a tree in memory of John Holt Andrews, please visit our floral store.

You can still show your support by sending flowers directly to the family, or by planting a memorial tree in the memory of John Holt Andrews
Share a memory
© 2020 Bagnell & Son Funeral Home. All Rights Reserved. Funeral Home website by CFS & TA | Privacy Policy | Terms of Use