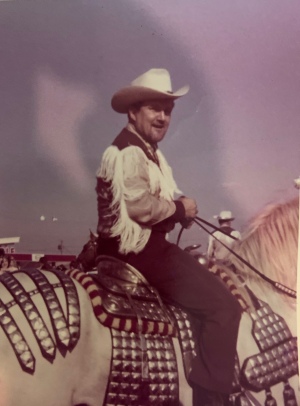 Charles Wollfarth Jr, “Coach,” “Mr. Charlie” entered eternal rest holding the hand of his wife Mary Ann Gallington and surrounded by family, friends and loved ones September 23, 2020 at 9:30 am.

He was a native New Orleanian born September 28, 1926, proceeded in death by his parents Charles Wollfarth Sr. and Angelina Irma Ranval.

He worked as a switchman with South Central Bell where he met his first wife of sixty-one years, the late Yvonne Velten.  They went on to have four children, Charles Buddy Wollfarth III (Lucille), the late Angelina “Cissy” Wollfarth, George Wollfarth (Maria) and Barbara “Barbie” Hughes (Randy).  Grandfather to; Charles Wollfarth IV and Jacquelyn Hughes Bertucci and Great Grandfather to Megan and Logan Wollfarth and Thea Bertucci.  Stepfather to Jeff Coyne (Tracie), Jacob Gallington (Casey), Steven Gallington (Ashley) and Timothy Gallington (Monorea).   Step Grandfather to Ryan Hughes and Louis, Amy, and Alicia Delise.  He was a veteran of the Marine Corp serving in WWII as a marksman and was on a Marine boxing team and later had several professional fights.  Charlie also played semi-pro football as a quarterback and linemen in New Orleans.

They moved to Arabi LA where he was active in recruiting children to play organized sports as the first coach in Arabi where he earned the nickname Coach.  Early on when there were no organized recreational sports in St. Bernard Parish his teams would travel to Bunny Friend Park in New Orleans.  As organized recreational sports came to St. Bernard Parish, he was one of the founders and coaches at Carolyn Park Playground.  He also coached boxing in the formational days of the program at St. Bernard Recreational Center.

He had a childhood love of horses and went on to own Arabi Stables and would bring horses and ponies home for the children of Carolyn Park to experience and share his love of riding horses.  Mr. Charlie and friends organized horse shows and donated the proceeds for uniforms, trophies, and recreational activities in Carolyn Park.  Coach was later inducted into the Carolyn Park Hall of Fame.   Charlie was a charter member of the St. Bernard Sheriff’s Posse and a Special Deputy.  He was a thoroughbred owner and breeder and member of the Louisiana Thoroughbred Breeders Association and raced his horses throughout the U.S. winning many breeders awards.  Family and friends are invited to attend a Funeral Service on Tuesday, September 29, 2020 at 12:00 p.m. in the Chapel of Bagnell & Son Funeral Home 75212 Hwy 437 Covington, Louisiana 70435 with visitation from 10:00 a.m. until service time. Interment to follow in the Eternal Rest Cemetery.

To send flowers to the family or plant a tree in memory of Charles Wollfarth, Jr., please visit our floral store.