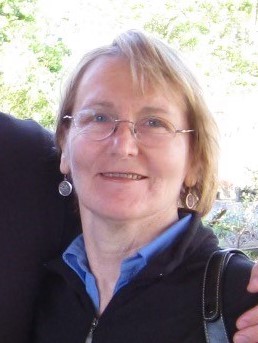 Known to her friends as Val, she was a prolific artist who produced countless paintings depicting her folksy, enchanting and nostalgic vision of the place she adored her entire life: New Orleans and the entire South Louisiana region.

Val died surrounded by family after a years-long battle with papillary renal cancer. She is survived by her sons, Richard Eberle and Jeremy Eberle, their wives, Stacey Eberle and Jessica Eberle, as well as her beloved grandchildren, Lillie and Sidney.

Born in New Orleans on Sept. 12, 1945, to Emile and Mary Combe, both of whom preceded her in death, Val was one of five children. Val often reminisced about coming of age in New Orleans in the 1950s and 1960s — reveling in the city’s many tall tales, observing its colorful characters, the sense of family and community and all of the trappings that make New Orleans so alluring. Through her art, these experiences inspired her endlessly and she was a proud New Orleanian until the day she died.

Val married Michael Eberle in 1977 and they settled in Harahan, Louisiana, where they had two sons before separating in 1990. In 1993, Val moved to Atlanta, Georgia, where she continued working for BellSouth — a career that spanned 35 years — and devoted the rest of her time to raising her boys. In 1998, she retired from the phone company and the temptation to “come home” was irresistible.

Drawing inspiration from her childhood, she then launched her career as an artist and quickly gained support in various galleries, fairs, online forums and festivals across Louisiana. Her paintings and corresponding stories number in the hundreds. If you had time to listen, she would tell you a story and if you loved her work, but couldn’t afford to pay, she would likely just give it to you. Val’s art was never motivated by money, but rather, by bringing happiness to her admirers. Val produced joy in spades and her artwork is her testament.

In addition to her immediate family, Val is also survived by her siblings, Patricia Quinn, Emile Combe, Ronald Combe and Keneth Combe, and numerous nieces and nephews.

Valree requested to be cremated and to have her ashes spread on the Mandeville lake front, one of her favorite places to watch the sunset.  The family would especially like to thank Jennifer and Eric, of Notre Dame Hospice, for their excellent care.

To order memorial trees or send flowers to the family in memory of Valree Eberle, please visit our flower store.