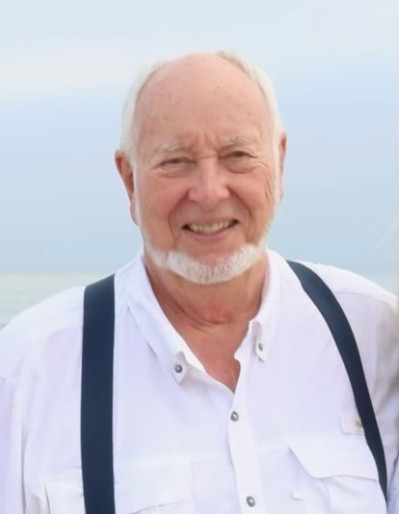 Thomas W. Grant (Tom) of Mandeville passed away surrounded by family on November 25, 2022, just hours shy of his 84th birthday. He was a faithful member of Church of the King, and most recently The Wellspring Church in Hammond.

He is survived by his children Jeffrey D. Grant (Bird), Julie Grant Brandt (Deron), and Austin Grant Vidrine (Jon), and 13 beautiful grandchildren. He is preceded in death by his parents Robert Grant and Helen Wintz Grant of New York City, brother Robert Grant and sister Betty Grant, both of California.

Thomas was born in New York City on November 26, 1938. He attended Newtown High School, went on to the Academy of Aeronautics, working in airplane mechanics.

Thomas (TWIGS) Grant followed his dream of flying and joined the Navy, becoming an F-8 Crusader pilot based at Navy Air Station Miramar and the USS Hancock from 1960-1965. He is a member of the 1000 MPH Club.

Upon discharge, Mr. Grant flew for Delta Airlines, basing him at the New Orleans airport. He spoke emotionally of the weighty honor he felt it was to fly fallen soldiers home to their families during the Vietnam War.

A lifetime member of the Ponchartrain Yacht Club, Tom managed the yacht club in the 1970’s and enjoyed sailing with friends and family throughout his lifetime. He lived aboard his most recent boat “Abundance” for a season.

Tom enjoyed attending church and Bible studies, spending time with his children and grandchildren, meeting friends for coffee groups or lunch, and as always, cracking jokes.

Tom Grant was a loving father, proud grandfather, and faithful friend. He loved the Lord and others so genuinely. His kind and generous heart has left an impact on so many, and he will be greatly missed.

A Military Honors Service will be held for Thomas W. Grant on December 19th at 12:30pm at the Southeast Louisiana Veterans Cemetery in Slidell, LA followed by a Celebration of Life service at the Ponchartrain Yacht Club in Mandeville, LA at 2:00pm. The family would like flowers to be sent to this location as well.

To order memorial trees or send flowers to the family in memory of Thomas Grant (Tom), please visit our flower store.