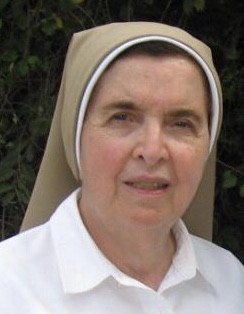 Sister Marina studied at the Teresian School in San Sebastian, Spain.  It was here that she developed a heart for service and encountered the religious community to which she would give her life. Sister Marina entered the Society of Saint Teresa of Jesus on October 14, 1964 in Tortosa, Spain. She professed her first vows on May 3, 1967 in Tortosa and her final vows on August 13, 1972 in San Antonio, TX.  She received a BA in Education from Dominican College, a Masters in Religious Education from Loyola University, and also completed post graduate studies in Spiritual Direction and Pastoral Studies.

Sister Marina was missioned to the United States shortly after her first profession of vows and arrived at St. Teresa’s Academy in San Antonio on August 8, 1967.  She would spend the rest of her life as a Teresian Sister ministering in the United States in various schools, parishes, and pastoral ministries in Louisiana and Texas. She served as a religion and music teacher at St. Matthew the Apostle in River Ridge, LA. (1968-1976); at St. Lawrence the Martyr in Metairie, LA (1976-1981); and at St. Teresa’s Academy, San Antonio, TX (1981-1982). She began vocation ministry in 1982 and served as Campus Minister at Pope John Paul II High School in Slidell, LA from 1984-1987.  From 1987-1998 she served as the Associate Vocation Director for the Archdiocese of New Orleans where she accompanied the vocation discernment of countless men and women.  From 1998-2000 and 2002-2003 she served as Campus Minister at St. Scholastica Academy, Covington, LA.  She began her ministry as Pastoral Associate at Mary Queen of Peace Parish, Mandeville, LA, in September 2003 where she continued to minister until March of this year.  During her time at Mary Queen of Peace, Sister Marina assisted with the pastoral ministry of the parish including retreats, spiritual direction, prayer groups for women, bereavement ministry, and pastoral care for the sick, as well as young adult ministry, Hispanic ministry, and the ministry and mission trips to Haiti.

Sister Marina loved life and lived it to the fullest. Her joyful spirit and her love for music were gifts she shared with all those she met. She had a heart for ministry and gave of herself generously to the mission which was entrusted to her.  Her ministry was rooted in her love for Jesus and her desire that others encounter Him and grow in relationship with Him.  She especially felt called to work for justice and to advocate for the poor and marginalized.  She was a founding board member of “Christ the Healer” which sent medical teams to Nicaragua.  At Mary Queen of Peace she helped with the ministry to Haiti, including raising funds for scholarships for Haitian students, and accompanied mission trips to Haiti several times.  For many years she corresponded with, visited, and was a pastoral advisor to a prisoner on death row.

While we will miss Sister Marina’s physical presence among us, we rejoice knowing that she is now enjoying the eternal embrace of our God who is Love and Life.  We are grateful for her example of a life well lived and know that countless people have grown closer to God through her ministry and example.  Like the seed which falls to the ground and dies, Sister Marina’s life and vocation have yielded a rich harvest. Now we are called to continue the mission of knowing and loving Jesus and helping others come to know and love him. All for Jesus!

All services will be held at Mary, Queen of Peace Catholic Church, 1501 W. Causeway Approach, Mandeville, LA 70471 and live-streamed at YouTube.com/MQPChurch. A Wake service will be held Friday, May 21 from 7-9 p.m. Visitation will be Saturday, May 22 from 10:00 a.m. until Mass will  at 11:30 a.m. The burial will follow at St. Joseph Abbey Cemetery.

In lieu of flowers, Sr. Marina requested that donations be made to the Mary, Queen of Peace St. Vincent de Paul Society. Visit maryqueenofpeace.org to give online or call (985) 626-6977.

To order memorial trees or send flowers to the family in memory of Sr. Marina Aranzabal Aguirrezabal, STJ, please visit our flower store.