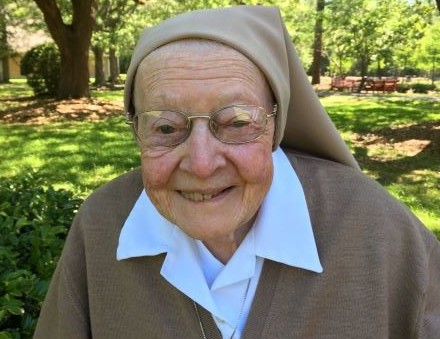 Sr. Dolores of Jesus Rodriguez y Yuguero, STJ heard the voice of the Bridegroom call her name and went peacefully to her eternal home on December 18, 2021.  She was born in Madrid, Spain on January 19, 1927 to Francisco Rodriguez Limon and Antonia Yuguero Gomez.  She was the oldest of 6 sisters.  Dolores entered the Society of St. Teresa of Jesus in Tortosa, Spain on October 12, 1943 and professed her first vows on April 26, 1946.  She professed her perpetual vows on April 26, 1951 at the Colegio Teresiano in Madrid, Spain.

In October of 1960 Sr. Dolores was sent by the General Council to New Orleans, Louisiana.  She served as a teacher at St. Louis Cathedral, St. Lawrence the Martyr and St. Matthew the Apostle in Louisiana and St. Teresa’s Academy in San Antonio, Texas.  She was the Provincial Coordinator from 1969-1975.  She returned to Spain as Provincial Coordinator of the Province of St. Teresa from 1976-1981 and then went to Granada, Nicaragua from 1981-1984 where she was the Principal of Sacred Heart School.  She then ministered at the parish of St. Patrick’s in Miami Beach and at Corpus Christi in Miami.  She returned to New Orleans in 2000 and moved to Covington, LA in 2002.  She was the provincial treasurer from 2003 -2018.  She spent the remainder of her years in retirement in Covington.

Sr. Dolores was an educator and a life-long learner who inspired her students and those around her.  She loved technology and learned how to take apart and put together computers. She was an avid reader and kept up to date on current events.  Her sisters remember her humility and her willingness to perform even the most menial of tasks with love.  Her courage and her boldness in the face of challenges and adversity were also admirable as was her determination to accomplish things.  She gave her everything as a religious for 79 years.  Her secret that she shared with her sisters was simple, “I love Jesus.”  It was that love for Jesus that marked her life and served as an example for everyone who knew her.  Dolores’ last few months were filled with the mystery of suffering as Guillain-Barré Syndrome gradually took away her physical strength and control.  But she gracefully embraced that cross as she had embraced life. We are grateful for Dolores’ faithful witness, and while we will miss her presence among us, we are confident that she is enjoying eternal life with God.  Today with the Church we also proclaim, “Blessed are you who believed that what was promised would be fulfilled.”

Her funeral mass will be December 21 at 10 a.m. at St. Henry de Ossó Chapel in Covington. Burial will follow at St. Joseph Abbey Cemetery.

To order memorial trees or send flowers to the family in memory of Sr. Dolores of Jesus Rodriguez y Yuguero, please visit our flower store.