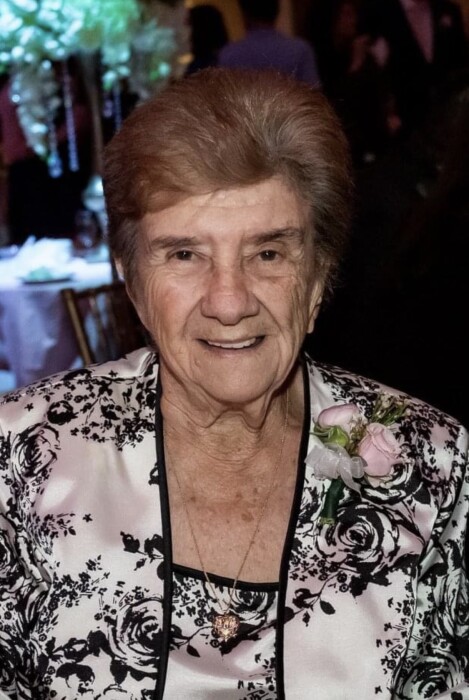 Myrna Nelson Lessard passed away peacefully on Wednesday, March 16, 2022, at the age of 90.  She was born on March 8, 1932 in New Orleans, LA to the late Floyd Nelson and Santa Latuso Nelson.

Myrna was the beloved wife of the late Leroy Lessard.  She was the loving mother of Debby LaBorde (Terry), Wendy Tejeda (John), and the late Lisa Ricciardone (Jim).  She was the proud grandmother of Terry, Jr., (Julia), Brian (Liz), and Jason LaBorde (Danielle); Jennifer Morales (Kris, Sr.), Melanie Lotz (Chris), and Jeffrey Tejeda (Dusti); and Joshua (Tania), Anthony (Katie) and Laura Ricciardone.  She was a great-grandmother to Meghan, Ethan, Mallory, Madilyn, Jackson, Ava, Ollie, Jeffrey, Jr., Kris, Jr., Marissa, Gabriella, Caroline, Luke and Liam, and a great-great grandmother to Gracie.  Myrna was aunt to Kendra Nelson; great aunt to Tova Buller, Tessa Powers, Scarlett Castay, and the late Colt Castay; and great-great aunt to Clark, Ren, and Reid.  She was a lifelong friend and cousin to Joyce Chaix and Janis Malone.  She is also survived by Luis Tejeda, numerous other extended family members and friends, as well as her sweet Shih Tzu of nine years, Sami.

Myrna was preceded in death by her dear brother, Harry Nelson.

Myrna married the love of her life, Leroy Lessard, at Mater Dolorosa Catholic Church on Saturday, September 30, 1950, and became a mother, one year later.  She resided in Metairie for over sixty years, as a loving mother and homemaker.  She enjoyed her outings to casinos, the New Orleans Fair Grounds, and the Mobile Greyhound Park.  Myrna was an award-winning bowler at Kenner Bowl, where she and her family spent most Friday evenings in the 60’s and 70’s.

The family would like to thank Myrna’s granddaughter-in- law, Danielle, for her guidance and contributions in Myrna’s care, and the close bond that she formed with her in the last months of her life.  They also wish to express their gratitude to Restoration Senior Living Center, Foundations Hospice, and TLC Caregivers (Loretta), for the compassion and love they showed her.

To order memorial trees or send flowers to the family in memory of Myrna Lessard, please visit our flower store.