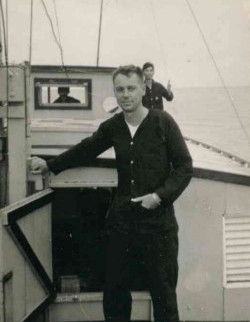 A Father, Husband, and Sailor's Final Tour of Duty and Life has Ended.

Francis Xavier Munger, born on February 25, 1935, took his last breath on July 31, 2022, at the age of 87.  Francis Munger grew up in New York and attended St. Thomas Aquinas High School.  He enlisted in the Navy and served for 26 years: 3 years enlisted and 23 years as an officer.  He excelled in mathematics and engineering and graduated from the United States Naval Academy in Annapolis, Maryland in 1960 and went to the U.S. Naval Post Graduate School in Monterey, California.  Francis X. Munger served in the Korean war and two tours Vietnam and is a decorated soldier won earned numerous medals for his gallantry, bravery, and military service including being a recipient of the Vietnam Service Medal, the National Defense Service Medal, the prestigious Bronze Star Medal, and the Navy Cross.

Mr. Munger retired from the U.S. Navy as Lieutenant Commander in 1976 and then worked for the Pentagon for 8 years in Naval Intelligence. In addition, Francis Munger worked at Bath Iron Works (BIW) in Bath, Maine as the Aegis Combat and Weapons Systems Program Manager.  Francis Munger helped BIW build the first Aegis cruiser for BIW: the USS Thomas S. Gates, CG-51.  He helped build advanced weapons systems for the U.S. Navy on Navy frigates, destroyers, and cruisers.  Mr. Munger then went to work for Avondale Shipyards in Louisiana as the Vice President in Engineering Defense.

Francis Munger loved the United States Armed Services and was always the officer, he was an avid reader and always had a book by his side, loved John Wayne, western movies, enjoyed having a few glasses of red wine at dinner, was a strong advocate in politics and for the America he grew up in, loved running, going for walks, education, and was a lifelong learner.

He is survived by his wife Aileen Munger, his children Patricia A. Munger, Michael F. Munger, Kathleen A. Milligan, Kelly A. Janis, Steven F. Munger, Patrick F. Munger and step-children Wendy Costanza, Riley Voiron, and Jodi Voiron, along with 16 grandchildren, and 8 great-grandchildren.

To our patriarch: Dad, your legacy will continue through your children such as the old-fashioned values and morals you taught and preached, and the strong work ethic you instilled in your children early on as toddlers.

Lieutenant Commander Munger: Your tour of duty is through, you’ve sacrificed, shed blood, and given as much as anyone could ever be expected to do in service for your country.  Know you have not failed your brothers in arms, so take your place of honor among those who have gone before you, and rest in peace knowing that you will be remembered for now and evermore.

Service will be held at 12:30pm on Saturday, August 6, 2022. at St. Jane de Chantal Catholic Church in Abita Springs, Louisiana.

To order memorial trees or send flowers to the family in memory of Francis Munger, please visit our flower store.