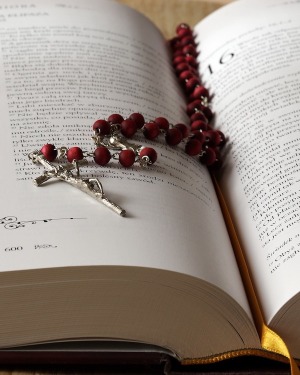 Born John Barousse in Jennings, Louisiana, on March 6, 1930, he was the son of John Barousse and Gladys Gardiner Barousse. He had two siblings: James Barousse and Betty Barousse Briggs. He is survived by several nieces and nephews.

John graduated from Saint Joseph Seminary and entered Saint Joseph Abbey in 1949. He suffered a deformity which cost him his left eye, and so, when he made monastic profession on August 25, 1950, he took the name Raphael, the angel who healed the blindness of the aged Tobit.

Father Raphael was ordained to the priesthood on May 30, 1955. His visual handicap hardly hindered him as an avid, life-long reader, and it was as a literature professor that he began his teaching career in the high school division of Saint Joseph Seminary. He spent several years as associate pastor in various parishes:  Our Lady of the Sacred Heart in New Orleans, Our Lady of Lourdes in Slidell, and Saint Benedict in Covington, and he gave weekend assistance for several years at Saint Clement of Rome in Metairie. He served also as chaplain at The Paul’s School in Covington, for the Little Sisters of the Poor in New Orleans, and at the Southeast Louisiana Hospital in Mandeville.

He had grown up speaking both French and English, and, when he was sent for a time to the monastery’s foundation at Esquipulas in Guatemala, he added Spanish to his linguistic repertoire. At Esquipulas, he served eventually as subprior and as novice master. Returning to Louisiana, he earned an M.A. in English from the University of Southwestern Louisiana (now the University of Louisiana at Lafayette), and he taught literature and English for speakers of other languages in the Seminary College.

He held several signiﬁcant positions in the monastic community:  He was Mass intentioner, guest master, oblate director, and director of the Abbey Retreat Center.  For several years he celebrated Sunday Mass in Spanish for residents of the Northshore area.

Father Raphael was a fascinating conversationalist, and he had a quick and ironic wit, enriched by his wide reading. As he aged, he and his humor became gentler. He celebrated his ninetieth birthday in March and his seventieth anniversary of monastic profession later in the year. After an illness of moderate length, he fell asleep gently in the Lord around noon on Thursday, October 29.

The monastic community will receive his body at 5:15 pm on Tuesday, November 3, and he will be buried in the Abbey cemetery the next day. Because of the restrictions necessitated by Covid-19, services related to the funeral will not be open to the public.

To order memorial trees or send flowers to the family in memory of Father Raphael Barousse, please visit our flower store.