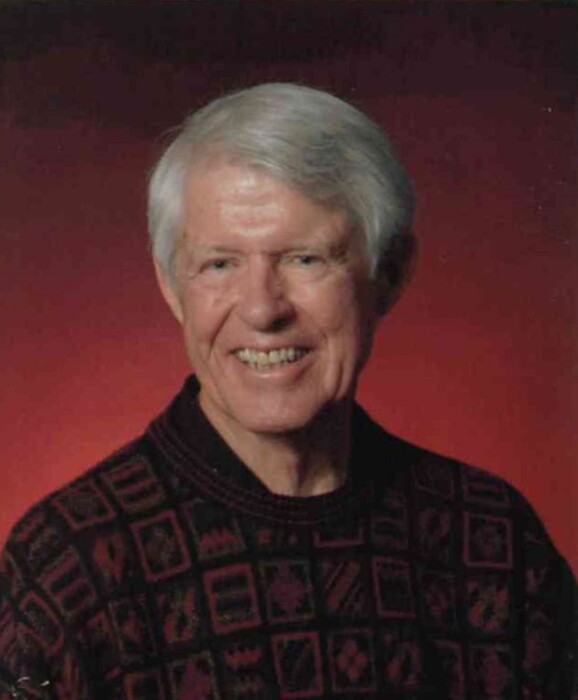 Robert Edward Henderson (Bob) died at home October 23.  He was 95. Bob was born February 28, 1925 in Kokomo, Indiana.  He was the son of Chester E. Henderson and Nellie Ackerson Henderson. He was the husband of Shirley Shroyer Henderson.  His siblings were Chester Henderson, Jr. and Ann Henderson Diemer, both deceased.  He graduated from Oakmont High School, Oakmont, Pennsylvania, and he was the Senior Class President.   He went from High School Graduation to World War II.  He served in World War II, 1943 – 1946 in the 11th Armored Division of the Army Infantry.  He was wounded in the Battle of The Bulge when he was serving as a scout for his Division.  He received the Purple Heart, and he was discharged as a Staff Sergeant.  He was Student Body President and a member of Phi Beta Kappa and Gamma Alpha at Carleton College, Northfield, Minnesota, where he received a Bachelor of Arts Degree in Physics in 1949.  He was a Stewart Scholar at the University of Missouri where he received his M.A. degree and his Ph.D. in Physics in 1953.

He joined the Allison Division of General Motors in Indianapolis, Indiana.  He became Chief, Applied Physics.  In 1963, he assumed responsibility for experimental programs in advanced energy conversion. He was also named to the Interdepartmental Energy Study Panel established by President Kennedy. In 1967, he was promoted to Manager of Experimental Research on gas turbines and transmissions.  In 1969, he was named Director of Research for the Allison Division of General Motors.  He was in the forefront of installing electric engines and gas saving initiatives.

In 1973, The Indianapolis Center for Advanced Research (ICFAR) was created to do research in the areas of medicine and engineering.  Dr. Robert Henderson was named its first Executive Director.  He also received the following academic appointments:  Professor, Purdue School of Engineering and Technology at Indianapolis; Professor, Department of Radiology, Indiana University School of Medicine; Adjunct Professor, Indiana University School of Public and Environmental Affairs.  ICFAR quickly gained national recognition as a leader in ultrasound for medical studies; its energy engineering and research division saved Indianapolis millions of dollars through an innovative change to the sewage sludge burning program, and it was involved in developing an annual cycle energy system to revolutionize home heating and cooling;  its incinerator program spread to many other cities; the Aerospace Research Applications Center Division operated by ICFAR for NASA was created to help NASA find industrial uses for space research.  While in Indianapolis, Bob was also very involved in the city and the civil rights movement.   He helped create the Butler Tarkington Neighborhood Association, and he was the President.  He was a special advisor to the U.S. Air Force Aeronautical Systems Division and President of the Indianapolis Scientific and Engineering Foundation.

In 1983, he was named the first Executive Director of the South Carolina Research Authority (SCRA), located in Columbia, SC.  SCRA was the vision of then Governor Richard Riley and was created to combine the resources of state government, institutions of higher education, and business and industry, and to aid in bringing high technology industry to South Carolina.  It was made responsible for developing and implementing a program to improve economic conditions throughout the State of South Carolina by means of enhancing scientific and engineering research and development in the State.  Under his leadership, international programs such as RAMP (Rapid Acquisition of Manufactured Parts), and PDES (Product Data Exchange using STEP, Standardization for the Exchange of Product Model Data) changed how government and industry do business.

During his career, Bob Henderson held other special Assignments:  International Solar Energy Society Board of Directors 1970-75, Mid America Solar Energy Center Advisory Board 1978-81, Co-Chair with Governor Campbell Southern Technology Council 1987-88, National Initiative for Product Data Exchange 1991-95, Department of Defense Science Board 1990-93, Defense Manufacturing Board 1988-90.  He was a life-long Episcopalian.   Since becoming a Mandeville, LA resident he has been a member at Christ Episcopal Church, Covington.  He was an excellent golfer, and he was a baseball fan, particularly of the Pittsburg Pirates.

A service will be held on Tuesday, November 3, 2020 at 1:00 pm at Christ Episcopal Church, Covington, LA  with burial following in the St. Francis Garden.

In lieu of flowers, memorial donations in Dr. Henderson’s name, may be made to Christ Episcopal Church, 120 S. New Hampshire Street, Covington, LA, 70433.

To order memorial trees or send flowers to the family in memory of Dr. Robert "Bob" Henderson, please visit our flower store.