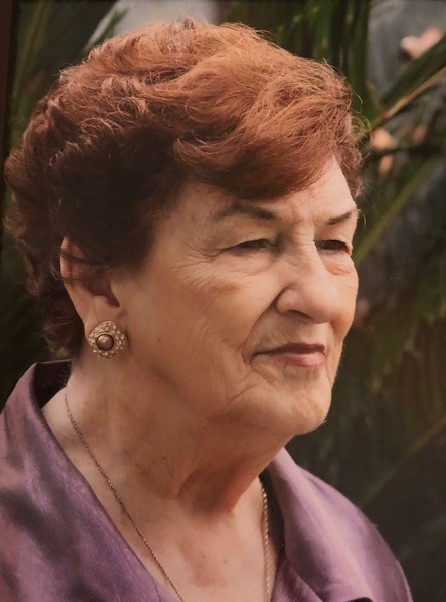 “He stood up to offer me his seat on a Greyhound Bus”, and that’s how Ann met her young soldier, Francis Hubert Hein. She would marry him at age 21 in New Orleans and they remained married 48 years until Francis’s passing 27 years ago. Ann and Francis mentored many friends through the years helping countless people along their way. Our Mom was fondly known as ‘Mama Ann’ to nearly everyone!

Ann’s active involvement in civic service started at the ripe age of 50 when she began volunteering to change the form of government in St. Bernard Parish where she resided and developed a keen interest in bettering the government in her community.

Ann spent the next 40 years advocating good government and believing everyone should be as passionate as she was! She created Citizens’ petitions, worked for Term Limits for elected officials, chartered Clubs & Action Leagues, and campaigned to elect Congressmen, Governors, & Presidents. She personally met 4 U.S. Presidents!

She received multiple awards and appointments to notable civic organizations including the State Parks & Recreation, World’s Fair Commission, and Executive Board on Aging. Her most esteemed roles of service were as the President of the LFRW (La. Federation of Republican Women) and Transportation Chairman for the 1988 Republican National Convention in New Orleans.

Ann worked tirelessly to engage youth and encourage everyone to get involved with government.  She believed it was our right and duty because, as she would say, “We ARE the Government!”.

Ann deeply loved God, her family, and her country. She described herself as an American patriot who placed her belief, first, in God. She was proud of her country and Louisiana Cajun heritage and strived to instill love of God and country in her children, grandchildren, and everyone she met!

She shared her love of music through the piano and her love of Cajun cooking…gumbo, shrimp etouffee, & crawfish bisque which was always generously shared with family and friends! Everyone had a seat at the table. She encouraged her children and grandchildren to pursue their passions as she ferried them to band practice, Scouts, karate, and music and ballet lessons. A lover of debates, she welcomed lively conversations and differing viewpoints.

On the principle of limited government Ann often quoted “we are of the people, by the people, and for the people.” And in her own words, “my life’s agenda is the better part of whom I have become. You and I are a vibrant American family of We the People.” “Hurricane Ann”, her husband’s loving moniker, was a force unto her own, but a force for good. Her unwavering love and support will continue to be felt, admired, and revered throughout our family’s generations and by all who were blessed to have known her. Mama Ann will be greatly missed but her legacy lives on in each of us. We lovingly commend her into God’s hands and into the welcoming arms of our blessed Mother Mary, whom she loved.

Ann is survived by her four children: Stephen (Sandy), Kathryn (Peter), Mary (Vincent), and John (Stacy), 15 grandchildren, and 17 (soon to be 18) great-grandchildren. She is predeceased by her husband, Francis, and their children Cheryl (Morris) and Michael (Kitty).

Services will be held at St. Genevieve Catholic Church in Slidell on Thursday, June 30th, 2022. Visitation will be held at 10am, followed by Mass at 11am and a repast in the church hall.

In lieu of flowers, Ann’s family requests that donations be made to the National Parks Conservation Association. https://support.npca.org/page/41642/donate/1

To order memorial trees or send flowers to the family in memory of Anna Trosclair Hein, please visit our flower store.