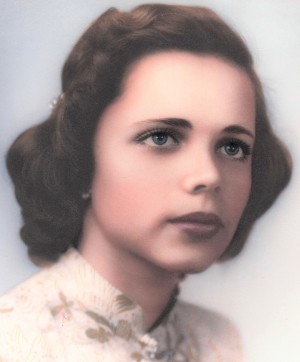 Born February 22, 1934, Lucille Dorvaux Brouillette passed away peacefully to her heavenly home on June 13, 2019 after a long illness. Daughter of the late Ferdinand Dorvaux and Louisa Finnin Dorvaux, she was one of three children with her elder sister Rosemary and younger brother, Ferdinand. Lucille grew up in New Orleans. She attended St. Maurice School in the elementary grades and Francis T. Nicholls High School. While in high school, she met the young man who would become her husband of 69 years, Vincent DePaul Brouillette. She became the mother of three children: Belinda Besnard (Michael), Vincent Brouillette, II (Deborah) and Alison Greffenius (Brian); and six grandchildren: Rebekah Bowers (Bennett), Jacqueline Brouillette, Stephen Besnard (Jenna), Fr. Daniel Brouillette, Matthew Besnard (Brittney) and Joseph Brouillette; and two great grandchildren: Ava Bowers and Elise Besnard.  Known as Lou, Miss Lou, Aunt Lou and Mere Mere to many friends, relatives, nieces, nephews, grandchildren and her children’s friends, Lucille was a loving mother, accomplished seamstress and homemaker, and a devout Catholic. Her family moved to Covington, Louisiana in 1976 where she was a member of St. Peter Catholic Church parish for 43 years. She was dedicated, unselfish and tirelessly devoted to her family, a lady of rare perseverance and affection for all. She was intellectually curious and had a refined sense of style. Her family thanks the physicians and nurses at St. Tammany Parish Hospital, the staff of Interim Hospice and most especially Mrs. Rosalie Phillips for the support and assistance offered to Mom during her illness. Family and friends are invited to attend the Funeral Mass on Monday, June 17, 2019 at 12:00 PM at St. Peter Catholic Church, 125 E. 19th Ave. (corner of Jefferson Ave) Covington, LA 70433.  Visitation from 11:00 AM until service time. Interment in St. Louis Cemetery #3, New Orleans, LA.

To send flowers to the family or plant a tree in memory of Lucille Dorvaux Brouillette, please visit our floral store.